The Nastiest Injury in Sports

My Life Before The Accident

“In spring 2013, I was exhausted. I had had just finished a year of 80 hour work weeks on the 2012 presidential campaign. After the election, the inaugural committee hired me for another round the clock effort.”

Hoping for the Best

It was Monday, May 20, 2013 at the first of my three adult recreation league basketball games that week. Early in the second quarter, a teammate rose for a jump shot. Instinctively, I crashed to the lane, boxing out for the rebound. The ball rattled off the right side of the hoop and I jumped to grab the board.

The man I was boxing out leapt at the same time and we tipped the ball straight up in the air, fighting for possession. As soon as my feet hit the ground, I popped right back up, determined to gain control. Coming down from the second jump, my right heel clipped my opponent’s shin, turning my foot outward, unable to support my landing. Instantly, I knew my knee was in bad shape. Picking myself off the ground, I called for a sub and hobbled my way to the sideline.

As the game continued, my knee grew to the size of a grapefruit. Hoping it was nothing more than a sprain; I headed home for a treatment of ice and ibuprofen.

“As the game continued, my knee grew to the size of a grapefruit. Hoping it was nothing more than a sprain; I headed home for a treatment of ice and ibuprofen.”

Feeling the Worse While Enduring Agony

“In between full-time jobs, I was making ends meet as a coach and substitute teacher. I could not afford to take a day off to visit the doctor, nor did I have insurance to cover the cost.” 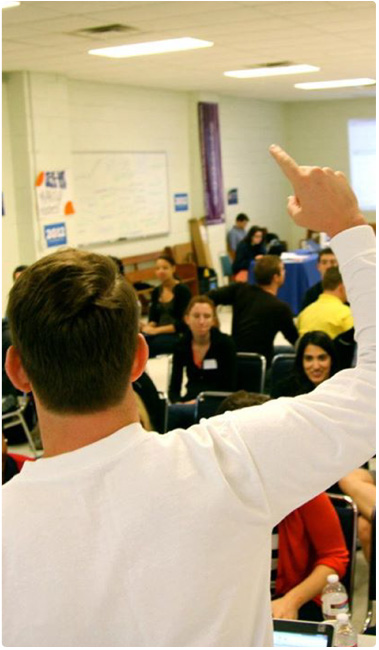 Without insurance, I visited Oakton High School and asked the athletic trainer for an assessment. It only took him about five seconds of testing the knee to deliver the news I had been dreading: I had a torn ACL.

Discouraged, I limped back to my car. On my way out, I ran into the mother of one of my favorite swimmers. Concerned, she asked what had happened. By the time I had finished my story, she had already emailed one of the swim dads, Dr. Keith Lawhorn, a top orthopedic surgeon in Northern Virginia. He quickly responded that he would see me the following morning at no cost.

I woke up at 4:15 AM, grabbed my coaching bag and headed to the pool deck. I struggled to make it through repeatedly having to sit down at the end of the lane.

Having previously committed to a substitute gig for Tuesday and needing the money, I gritted my teeth and limped from the pool deck to the classroom. All day, I was in complete agony. My knee was so unstable that the upper and lower parts of my leg felt like toothpicks balancing on top of each other. Neither sitting nor standing could relieve the discomfort and the swelling continued to increase.

My Road to Recovery

The Good News and the Bad News

“It wasn’t all good news. Jumping, cutting, and other lateral motions, however, would not be possible without an operation. Without surgery, basketball was out.”

During my visit with Dr. Lawhorn, he confirmed the trainer’s diagnosis. I had torn my ACL. Thankfully, a series of x-rays checking for fractures came back negative.

We sat in his office and discussed my options. I was surprised to learn that surgery was not immediately required and that I was able to return to near full strength with conditioning. The pain and swelling, he told me, would improve over the course of the month and I would soon be able to swim, run, bike – any straight-line motion.

Dr. Lawhorn comforted me with a story of a previous patient who, like me, lacked medical insurance. Five years after tearing his ACL, the patient returned with a good health plan that covered the cost of the surgery. I hoped I would not have to wait that long, but appreciated that there was flexibility in my treatment schedule. 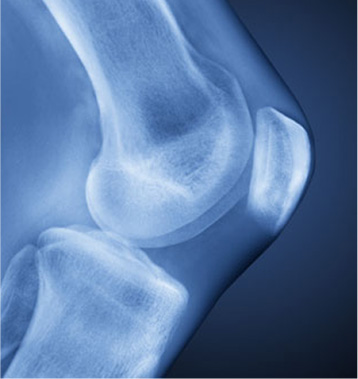 Do you or someone you know need an Orthopedic Surgeon?

The Final Stretch of my Journey

“My surgically repaired leg could only bend 40 degrees. On a leg lift, my lower leg lagged nearly 15 degrees because my quadriceps could not support it.”

Nearly a year after the injury, after securing a job with great insurance, Dr. Lawhorn performed the operation, using a hamstring tendon graft, and reconstructed my ACL.

The final stretch of my journey to a full recovery began three weeks later when I arrived at Commonwealth Orthopedics Physical Therapy clinic at the Reston Hospital Center to begin my physical therapy. My goal, as it had been all along, was to get my knee back in top shape without any limitations.

The initial measurements showed me how much work laid ahead of me. My surgically repaired leg could only bend 40 degrees. On a leg lift, my lower leg lagged nearly 15 degrees because my quadriceps could not support it. And when I attempted to straighten the leg, I could only reach 10 degrees, considerably short of the hyperextension I was capable of on my healthy leg.

My first exercises were simple: leg lifts, heel slides, one-leg balancing, and stretching. I was looking at a long road to recovery but I set goals along the way.

Just one month after surgery, after re-teaching myself how to walk, I began to walk around without a brace. A few weeks later, I was going up and down stairs without hesitation. Most excitingly, about two months after surgery, I was warming up on an exercise bike and completed a full rotation! Although far from where I ultimately hoped to be, I found encouragement in every one of these milestones. 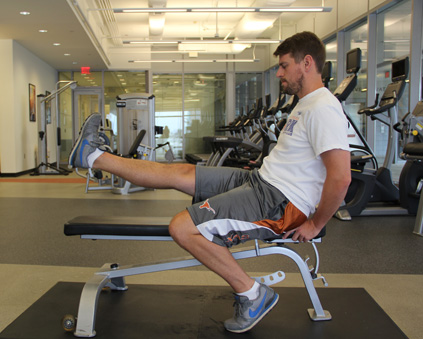 Weeks 1-2: Straight leg raises are a motion exercise that focus on gradual weight bearing on the knee 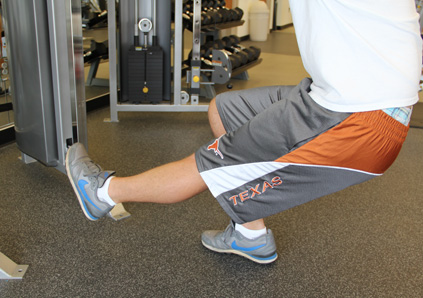 Can we help you find a Physical Therapist?

Making the Return to the Court

“In October, 17 months after tearing my ACL, I will be discharged from physical therapy, with my goal of no limitations having been accomplished.”

This week, I entered the second to last phase of my rehab – jumping and running. For the first time since April 2013, I was able to elevate off the ground with the knowledge and comfort that I would land safely.

The first run, just down the hallway of the doctor’s office, was one of the most exhilarating moments since surgery. The freedom to move at full speed, knowing that I was one step closer, provided an incredible sense of relief.

In a few weeks, I will begin working with my therapist to begin side-to-side cutting moves and other lateral motions that will push the knee to its limits, instilling in me the confidence to head back to the basketball court.

In October, 17 months after tearing my ACL, I will be discharged from physical therapy, with my goal of no limitations having been accomplished. I plan to celebrate by crashing the boards and grabbing a rebound. 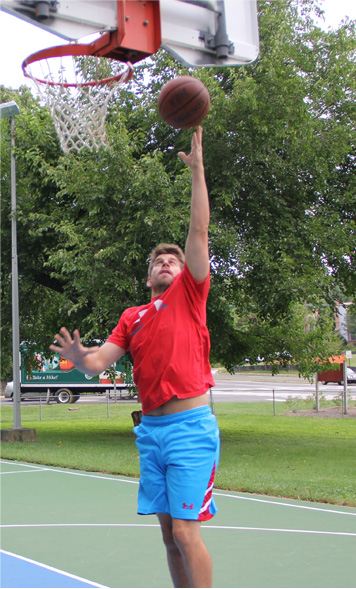